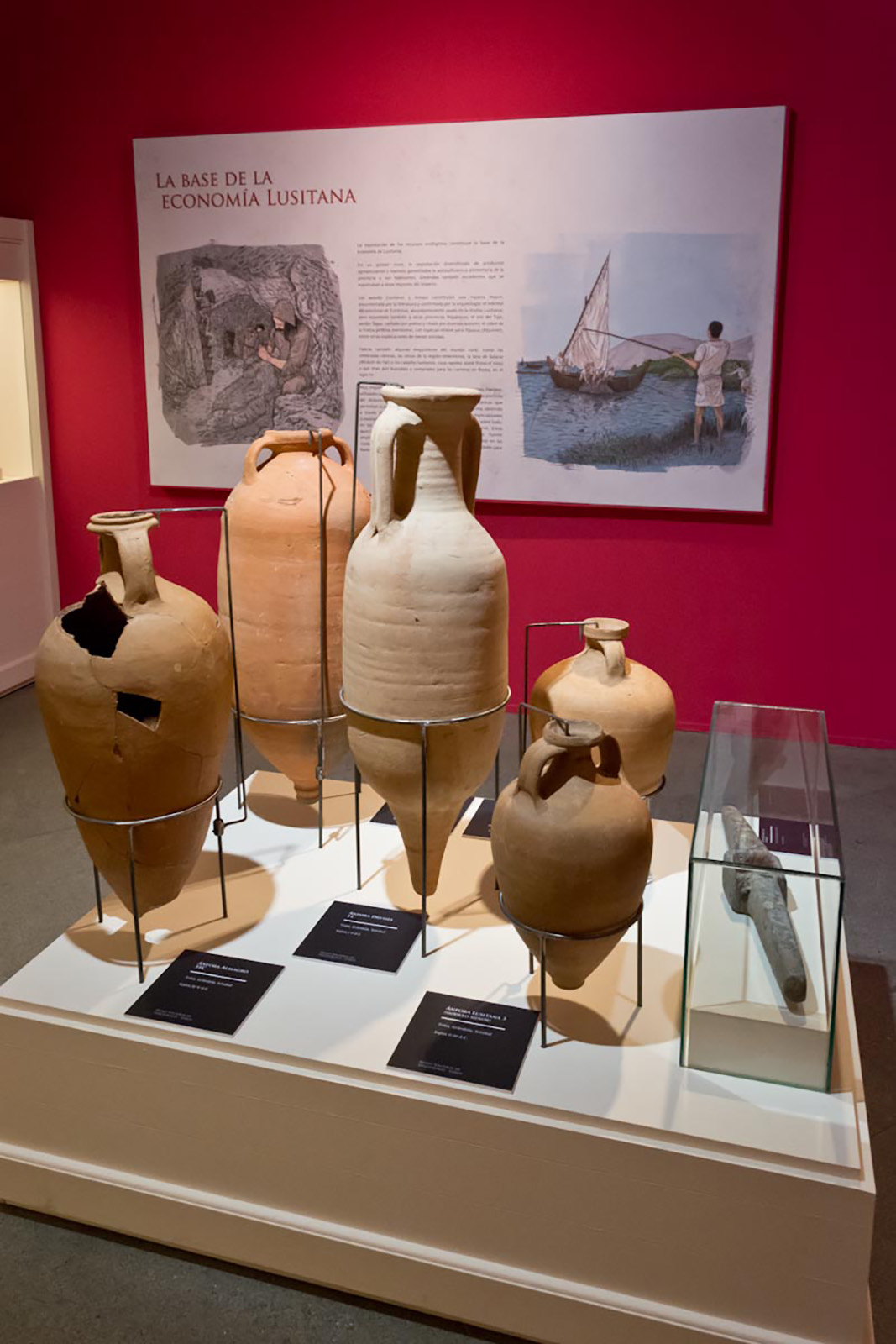 The economy of Lusitania

Lusitanian amphoras from the National Archaeology Museum of Lisbon. Roman Lusitania exhibition (2015). Archive of the MNAR.

Roman glass models from the colony Augusta Emerita. Archive of the MNAR.

Models of Terra Sigilata from the colony Augusta Emerita. Archive of the MNAR.

THE ECONOMY OF LUSITANIA

The exploitation of endogenous resources is the base of the Lusitanian economy. On a first level, the diversified exploitation of farming and sea products guaranteed food self-sufficiency of the province and its population. It also generated a food surplus which was exported to other regions of the Empire. The metalla (quarries and mines) constituted greater wealth, documented by the literature and confirmed by the archaeology: marble from the anticline of Estremoz, abundantly used in Lusitania itself, but also exported to other Hispanic provinces; gold from the Tajo, aurifer Tagus, sung by poets and reported by different authors; copper from the pyrite southern strip, with special relevance for Vipasca (Aljustrel), among others explorations of less importance.

There would also be some delicacies from the rural world such as the famous cherries, olives from the region of Emerita, wool from Salacia (Alcácer-do-Sal) or the Lusitanian horses, whose speed praised Pliny the Elder and which were still looked for and bought for races in Rome, in the IV century.

The exploitation of sea resources has also been very important to produce preserved food and fish sauces. The Atlantic fish wealth joined with the favourable weather conditions allowed the joint exploitation of fish and sea salt, which were obtained through evaporation. In specialized production units (cetariae), condiments based on fish and salt were made, especially, in the estuaries of the Sado and Tajo and in the coasts of the Algarve. This appreciated food, which was moved in ceramic amphoras, was extensively distributed inside the province, both in cities and in rural establishments and also exported to Rome and other regions of the Empire.

THE EXPLOITATION OF RESOURCES

In early times, preserved food and fish condiments were highly appreciated and eaten. In the literature we find a lot of references to products like the garum liquamen or halex, the first one, a condiment resulting from macerating fish in salt, seasoned with herbs and other flavourings; the second one, a paste resulting from making the garum, that is, a byproduct. This products were made at people’s own facilities, closed and covered buildings, organized around an indoor patio, surrounded by big tanks coated with a layer of lime mortar which waterproofed them. The fish and salt were dumped inside these tanks and they were left to macerate for some time; therefore buildings were covered to avoid that the unexpected rains ruined the product. After the macerating stage, the liquid component (the garum/liquamen) was moved away and packed, and the same was immediately made with the remaining paste (or halex). Both were bottled in clay amphoras and moved to different consumption places. In this way, due to the distribution of the buildings which were allocated to make the amphoras for transport, normally with ceramic kilns near them, we know about the geography of production and due to the identification of the amphoras in the final consumption places, we know about the geography of distribution.

In the big cities, as Augusta Emerita, handicraft to supply daily needs was very important. These activities didn’t used to have an exportation scale, but they were very relevant: ceramics for building, common and fine dishes, oil lamps or glass were made in urban or suburban offices guaranteeing that there will be enough every day. Naturally, due to the scale and specialization of these products, they also reached minor populations of its territory and the villas.