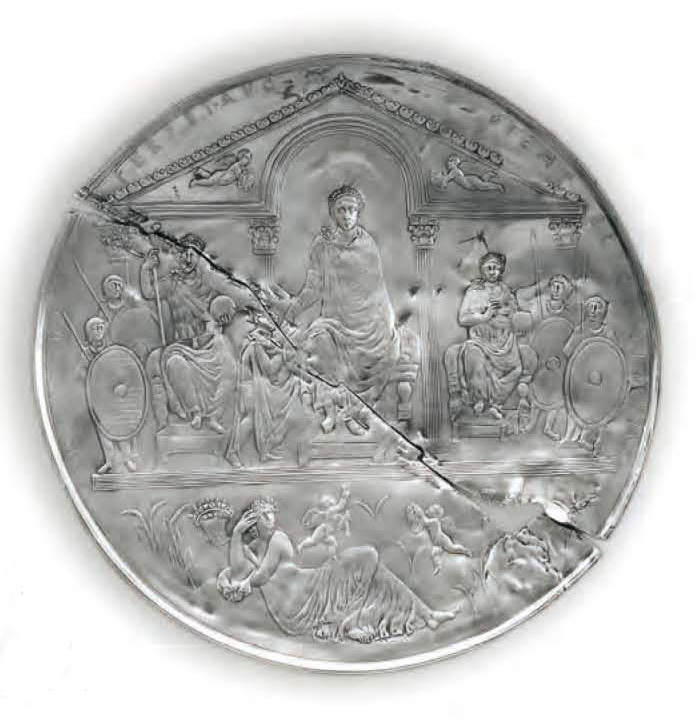 Missorium of Theodosius. Royal Academy of History of Madrid. Archive of the MNAR.

476 AD, which symbolically represents the fall of the Western Roman Empire, is the conclusion of a process which includes important transformations since the III century AD when Rome was governed by a political power which was used to facing populations’ rebellions and uprisings; populations which they trust in and which took part of the Empire. At the beginning of the V century, successive movements of Germanic peoples burst into the Western area. They cross the border and not only don’t obey Rome but they rebel against it.

Among these transformations, we must include the adoption of the Christianity as the official religion of the Empire in year 380 by the Emperor Teodosio. This event will have a great impact in society and the transformation of the Empire, although it didn’t come to significantly change the way of life of the populations which live far from the big cities. In these, it can even be seen a good cohabitation of the pagan cultural and literary tradition together with the growing Christian devotion.

The invasion of Augusta Emerita by the Alans, came uncertain times although people from Lusitania would not leave the land where they lived.

At the end of the III century and during the IV century, we can see the growth of the big rural villae. The great oligarchy, invests as a symbol of prestige, in monumentalizing the properties where they live with their families. In the next centuries, the lack of power and a centralized government which homogenised life in Lusitania, lead to an unequal evolution in its territory itself.